The twenty-eighth edition of the Benois de la Danse Awards, which took place last night at the legendary Bolshoi Theater in Moscow, left good news for Spanish dance. The jury chaired by the legendary Yuri Grigorovich -whose ranks included the current director of the National Dance Company, Joaquín de Luz- awarded the so-called ‘Oscars of ballet’, with the Benois de la Danse for Best Male Performer going to the Spaniard Jesús Carmona. In this way, the Barcelona artist adds the 9th ‘oscar of dance’ for Spanish dance and the 2nd in the field of flamenco, after the one obtained by Fernando Romero in 2011.

The Valencia Endanza team would like to publicly congratulate Jesús Carmona for this well-deserved award. Jesús, we are waiting for Lucía Campillo, the Benois de la Danse and you with open arms in our next edition 12 bis of Valencia Endanza (from July 19 to 31). Congratulations, Jesús! 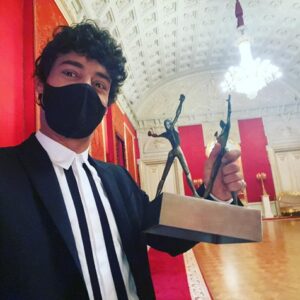 Born in Barcelona, Jesús Carmona is a dancer, creator and choreographer graduated in Spanish dance and flamenco at the Institut de Teatre. He trained in flamenco with teachers such as Antonio Canales, Eva Yerbabuena, Manolete, María Magdalena and Güito. In 2005 he joined the Ballet Nacional de España, being promoted to the category of first dancer two years later. As a choreographer, his debut work, El silencio de la luna, dates from 2006. In 2010 he left the BNE and returned to direct his own projects a year later. As a result, he has created Cuna Negra & Blanca, 7 balcones, Ímpetu’s, Equilibrio, Amator, The Game and El Salto. Best Outstanding Dancer of the XX Certamen de Danza Española y Flamenco de Madrid in 2011, his list of awards includes the Premio Desplante at the 52nd Festival Internacional de Cante de las Minas de la Unión, two Latin UK Awards, the El Ojo Crítico de Danza 2019 Award from Radio Nacional de España, and the Premio Nacional de Danza 2020, in the Creation category. Last night, Carmona rounded off her extraordinary season with the Benois de la Danse – the ‘oscar of ballet’ -, at the Bolshoi Theater in Moscow.