Skip to content
Stay at the Royal Conservatoire of The Hague

Stay at the Royal Conservatoire of The Hague

Having the opportunity to access the most prestigious schools in the world is one of the challenges we set ourselves every year at Valencia Endanza, because we know the added value it adds to the experience acquired in our international course. That is why we feel that every scholarship or internship we obtain at Valencia Endanza is a stepping stone towards your future professional career. In this sense, today we would like to announce that one of the participants of Classical III will be able to access a one-week stay at the Royal Conservatoire of The Hague.

The relationship between the Conservatoire of The Hague and Valencia Endanza goes back a long way, as three students from past editions of our international course have already enjoyed a stay at the Dutch centre. This stay would not have been possible without the collaboration of our teacher Esther Protzman and, of course, the support of the director of the Conservatoire, Jan Linkens, to whom we would like to extend our thanks.

We would like to remind you that the grant of the stay will be subject to there being a candidate who fits the profile required by the Dutch conservatoire. Furthermore, at all times, the stay will be in accordance with the health situation in the Netherlands and, of course, with the strict observance of the anti-Covid protocol. The stays will be announced at the Valencia Endanza 2021 Closing Gala, which will take place on 31 July and will be attended by the participants of the twelfth edition of our international course.

As always, we encourage you to keep an eye on our social networks to find out all the news about the 12th edition of Valencia Endanza, which will take place from 19 to 31 July at the Mas Camarena resort (and with a rigorous anti-Covid protocol). See you in Valencia Endanza! 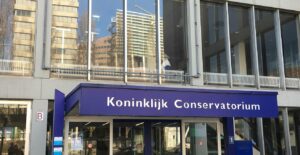 A brief history of the Royal Conservatoire of The Hague

The Dance Department of the Royal Conservatoire of The Hague was established in 1956 by Sonia Gaskell, director of the Nederlands Ballet. The teaching methods were initially based on British ballet studies, with Valerie Adams, a leading teacher at the Sadler’s Wells School, as principal teacher. In 1973, a former soloist of Het Nationale Ballet, René Vincent took over the direction of the department, to be succeeded a decade later by Marian Sarstädt. During Jiří Kylián’s tenure as artistic director of the Nederlands Dans Theater (NDT), the two institutions established a close collaboration.

In 2002, the former soloist and deputy director of Het Nationale Ballet – and guest professor on the faculty of numerous editions of Valencia Endanza – Wim Broeckx was appointed director. In 2011-2012, Nancy Euverink, former student and dancer of Nederlands Dans Theater, took over as director. In 2014, Jan Linkens, also an alumnus and former dancer at Het Nationale Ballet, was appointed director of the dance programme, a position he continues to hold.

The Dance department of the Royal Conservatory maintains a close relationship with leading Dutch dance companies such as Het Nationale Ballet, Introdans, Scapino Ballet Rotterdam and, in particular, Nederlands Dans Theater. The Fondation pour l’Art Choreographique has designated the Royal Conservatoire in The Hague as one of the institutes where the winners of the Prix de Lausanne ballet competition can study free of charge for one year. The school is affiliated with the Assemblee International de l’Ecole Nationale de Ballet du Canada in Toronto (director Mavis Staines), an international dance meeting organised every four years for students and artistic directors of professional ballet schools from all over the world.