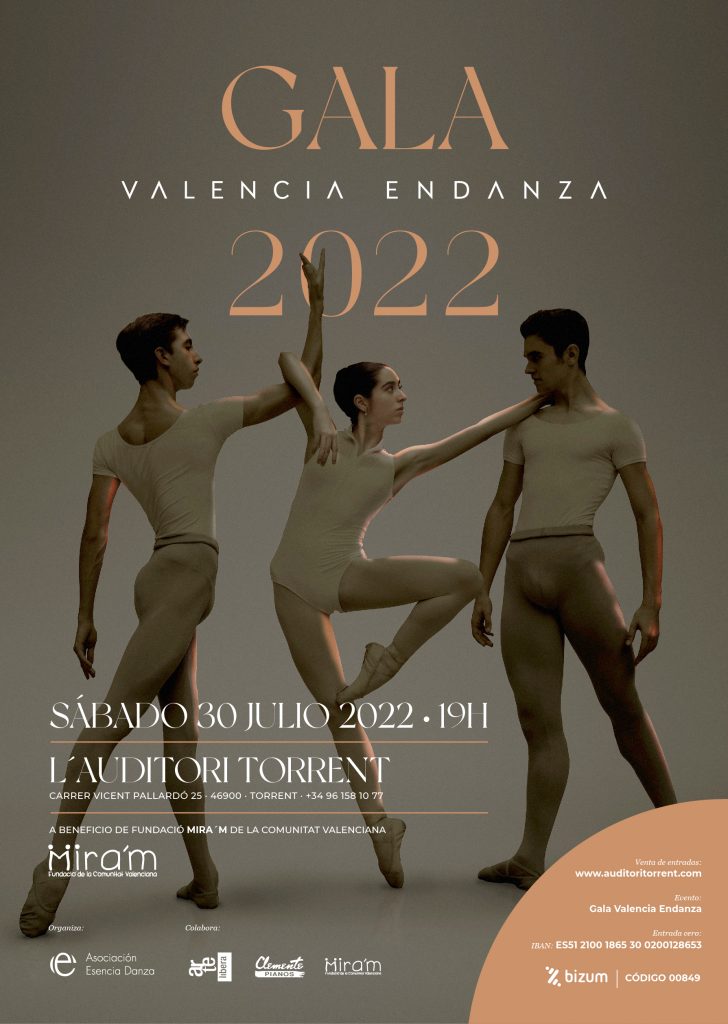 Mira’m Foundation, which works with people with autistic spectrum disorder, will be the charity that will receive the proceeds of the show.

Esencia Danza Association, responsible for the organisation of Valencia Endanza, is pleased to announce the celebration of the Closure Gala of the course, which will take place in L’Auditori de Torrent, on Saturday 30th July. Under the artistic direction of Diego Brichese and Pilar Martí Murciano, the participans of the course will show the results of the workshops. It will conclude with the special participation of professional dancers, with the aim of encouraging all students of Valencia Endanza.

Former soloists from Birmingham Royal Ballet and English National Ballet, Kristen McGarrity and James Forbat respectively, have selected the finale  pas de deux of “No Man’s Land” by the late choreographer Liam Scarlett. The work was created to commemorate the centenary of the First World War and explores the themes of loss, mental illness and the role of women in war, all of which are highly topical. Flavio Salamanka, Kammertanzer,  soloist at the Salzburger Landestheater and choreographic assistant, has chosen the solo “Across The Border”, choreographed by Reginaldo Oliveiras,  a piece that deals with the idea of going off the regular path to discover what is outside the comfort zone, seeking the unknown to bkreak freee or lock in. Also Institut del Teatre  graduate Adrián Gómez, winner of  the Valencia Endanza scholarship at the Convocatoria Nacional de Danza Ciudad de Castellón, directed by Gabriella Foschi , will dance the piece ”Danza IX”, choreographed by Antonio Pérez. Finally  Maya Ciobota, Rumanian dancer winner of the Valencia Endanza – Mas Camarena scholarship, will perform one of the variations of the famous “Pas de quatre” choreographed by Jules Perrot.

An essential aspect to highlight is that the show has a benefic nature, as the box office proceeds will go to support the fantastic work carried out by Fundación Mira’m, which works to improve the quality of life of people with ASD (Autism Spectrum Disorder) and their families, as well as to raise awareness in society that people with ASD are full citizens. In addition, for all those who cannot attend, we are offering a row zero with a symbolic ticket to support the work of the Mira’m Foundation (IBAN ES51 2100 1865 30 0200128653 | BIZUM Code 00849).

Tickets for the Valencia Endanza 2022 Gala are on sale on the L’Auditori Torrent website, at the single price of 15 euros.

BIO OF THE GUEST ARTISTS 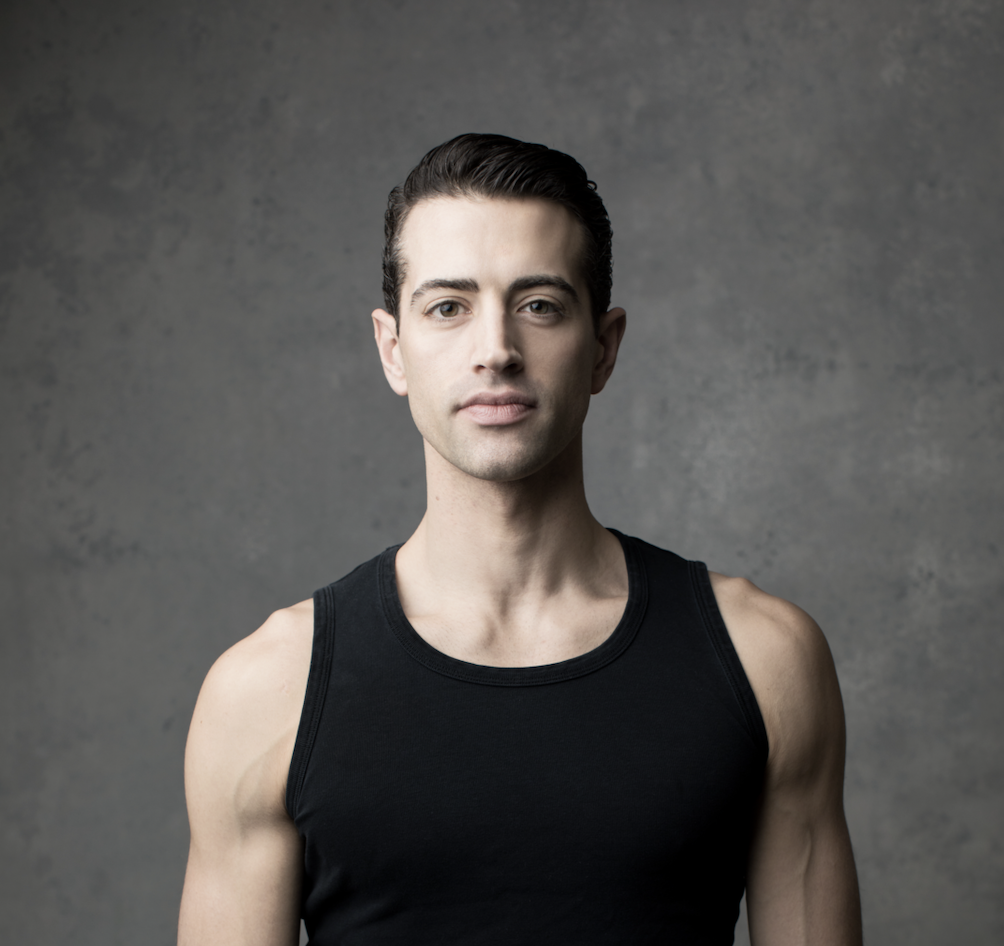 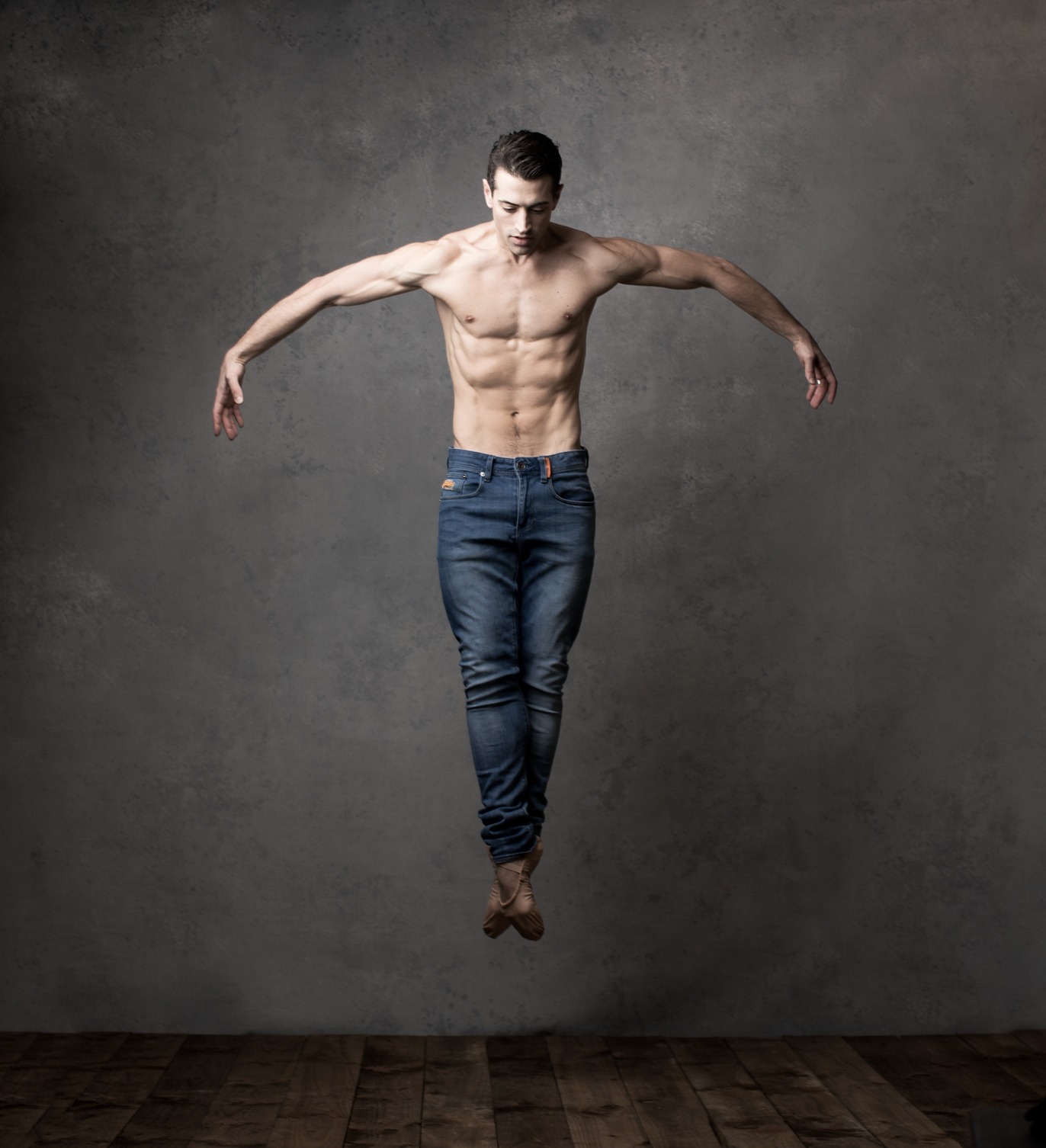 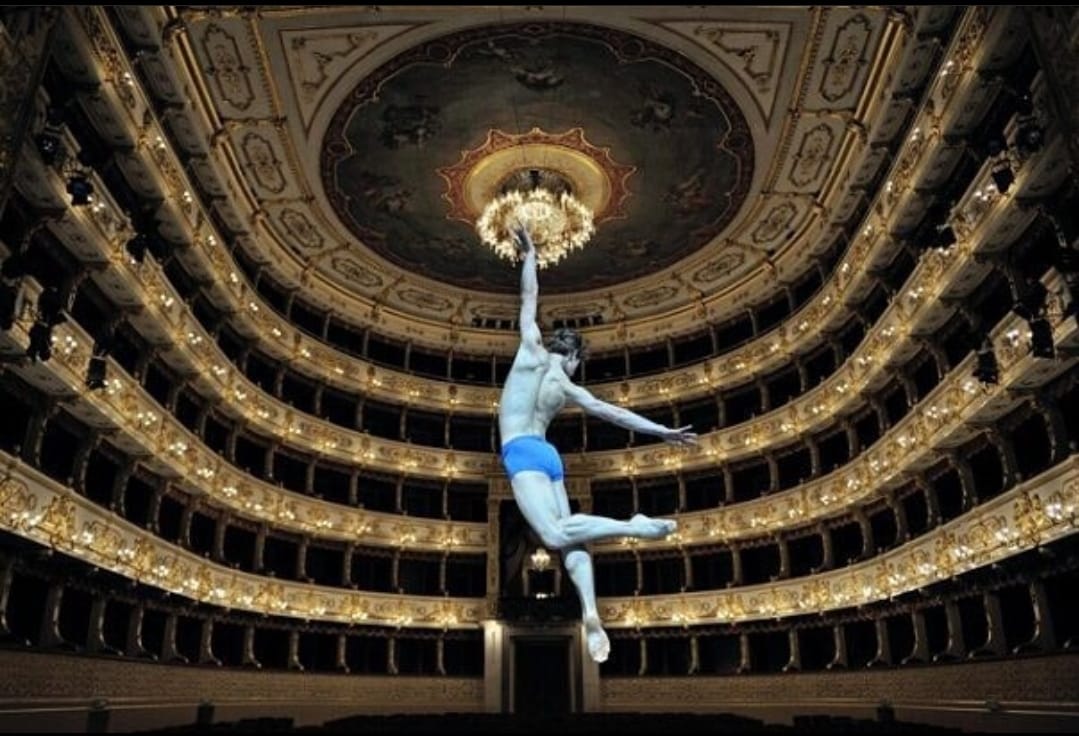 Born in Surrey (England), James Forbat started dancing at the age of four. He trained professionally at the Royal Ballet school from 1994, graduating in 2005 with honours. He joined English National Ballet in 2005 and was promoted to first artist in 2008, soloist in 2009 and first soloist in 2013. James has danced principal roles in The Nutcracker, Swan Lake, Giselle, Romeo and Juliet, Cinderella, Sleeping Beauty and Etudes, as well as principal and soloist roles in numerous neoclassical and contemporary style works with a range of choreographers including, Van Manen, Kylián and Macmillan. 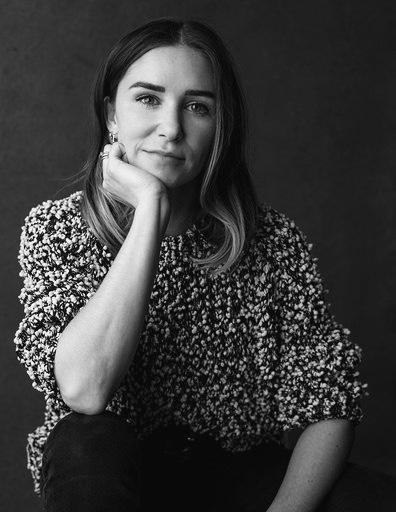 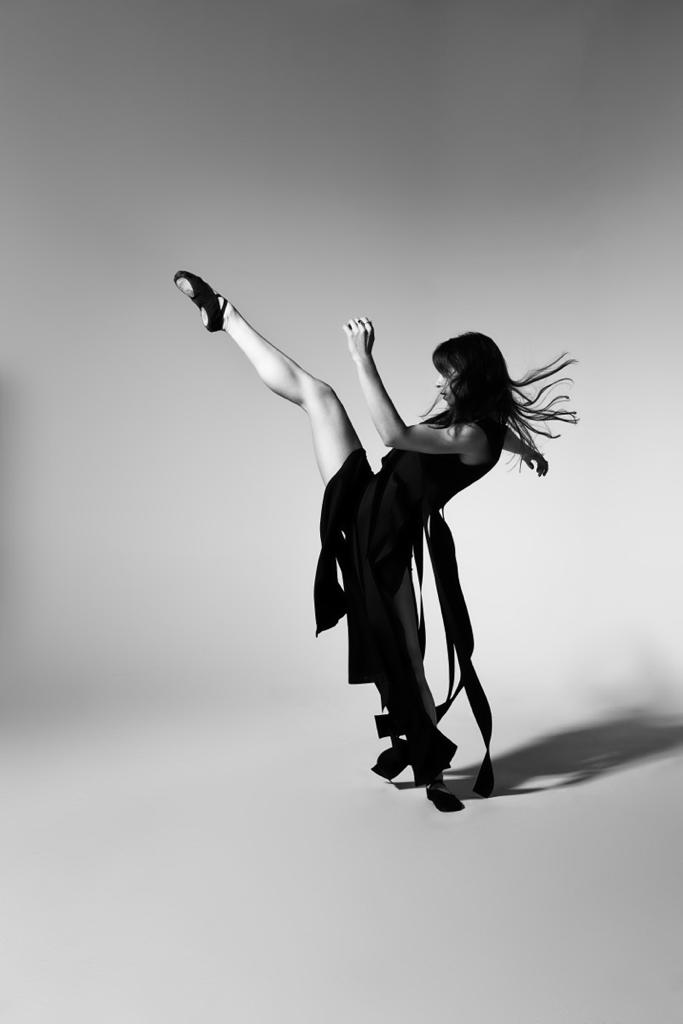 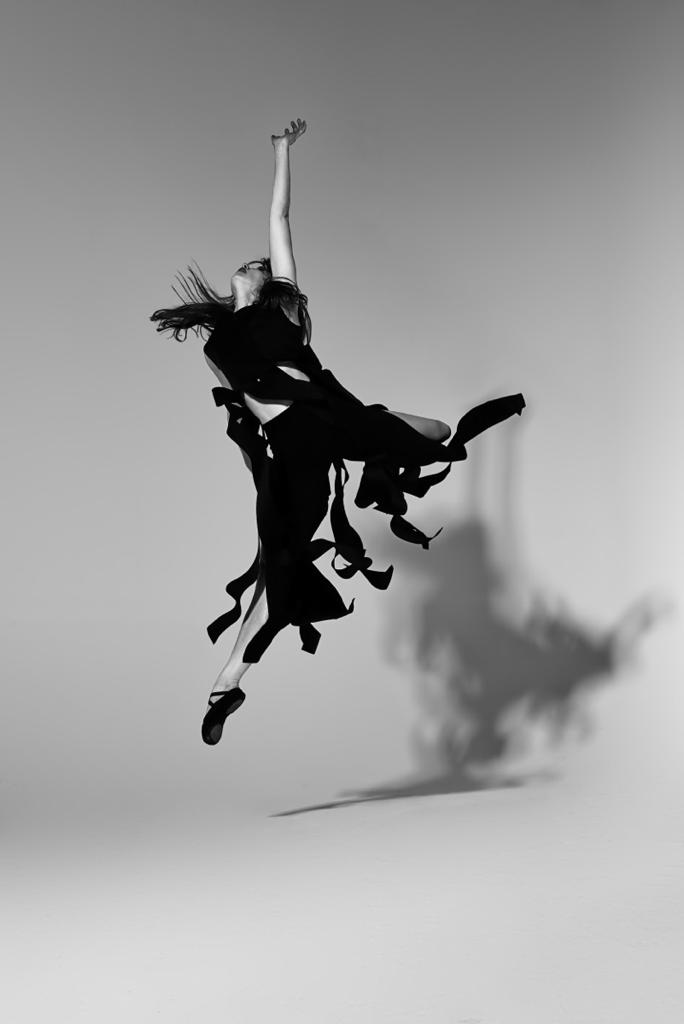 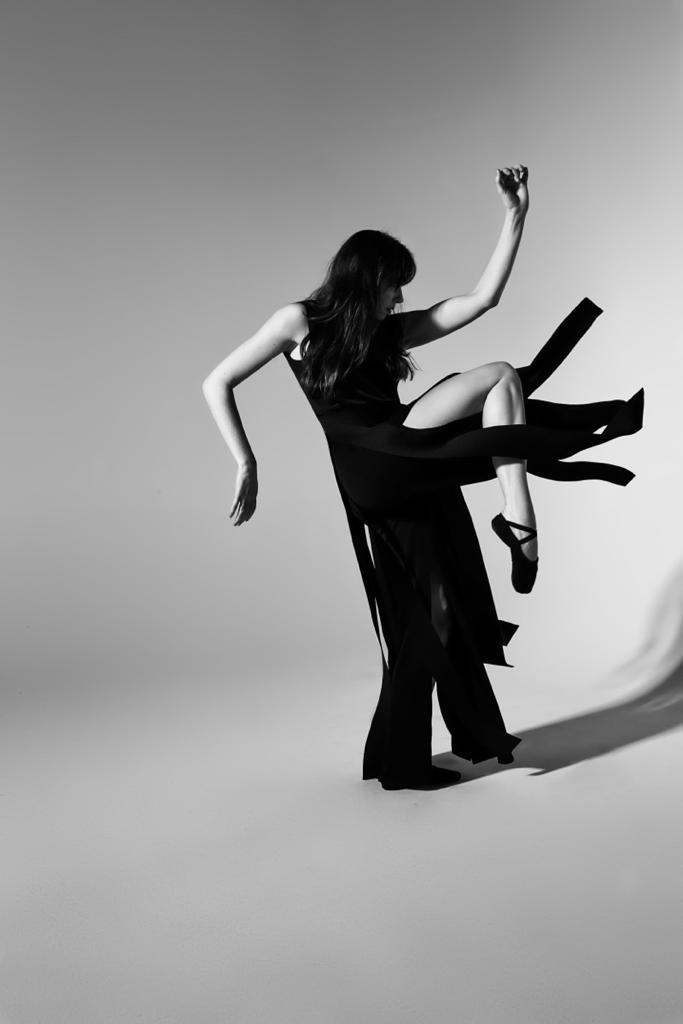 Kristen McGarrity, the multi-faceted artist who was a soloist with Birmingham Royal Ballet

Born in Glasgow (Scotland), Kristen McGarrity trained at The Royal Ballet School and during that time won numerous awards including The April Olrich Award for Dinamic Dance, the Adeline Genée bronze medal and was a finalist for British Dancer of the Year. She graduated from Birmingham Royal Ballet, where she danced numerous solo roles, including Agon, Galantaries, In the Upper Room, Pineapple Poll, Pulcinella and many more. At the end of her performing career, McGarrity graduated with a degree in psychology and a teaching diploma from The Royal Ballet School, while touring the UK and Europe as a singer, composer and musician with artists Andy Burrows and Emmy The Great.

She has worked as Principal Coach for The Royal Ballet, choreographic assistant and teacher/repeater for students at The Royal Ballet School. As a staging/rehearsal manager she has worked with other companies such as the Joffrey Ballet, Munich Opera Ballet, Royal New Zealand Ballet. As a teacher, she is a guest lecturer at many prestigious schools, including The Royal Ballet School and the English National Ballet School. Kristen McGarrity currently works freelance as a rehearsal assistant for Scottish Ballet and other dance schools. An advocate for welfare and positive cultural development in the dance industry, she is co-founder of the Matter Up initiative. 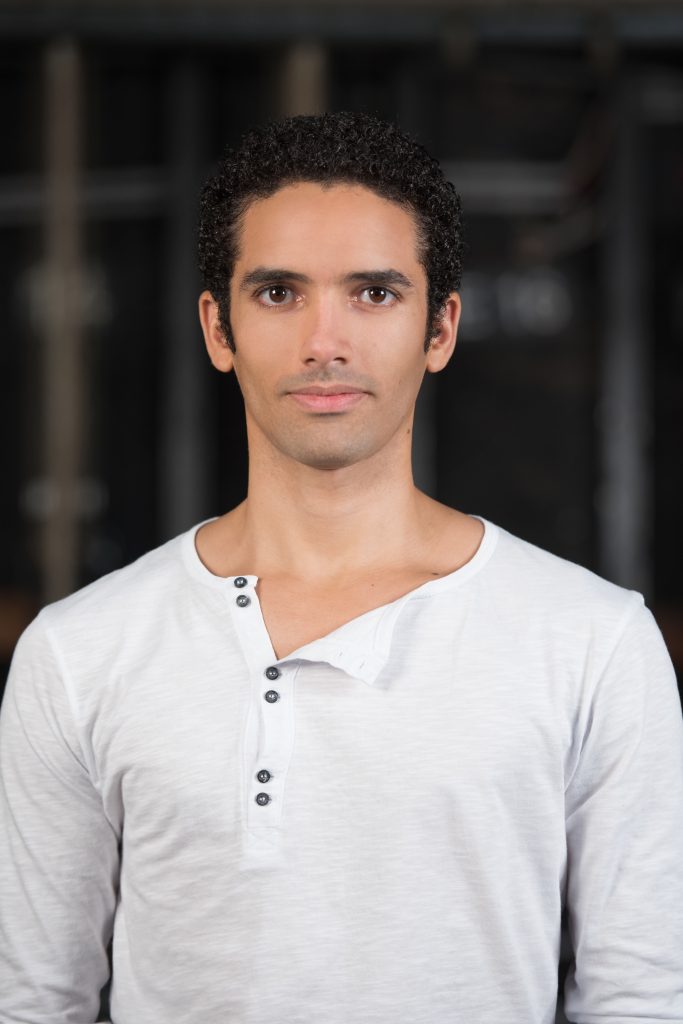 Flavio Salamanka, soloist and choreographic assistant of the Salzburger Landestheater

The Brazilian dancer Flavio Salamanka received his training in his home country at the Salamanka Academy, the Karla Ferreira Ballet Academy in Vitória, the Stúdio de danças in Recife and as a scholarship holder of the Birgit Keil Dance Foundation in Germany at the Academy of Dance Mannheim. In the 2003/2004 season he joined the Staatsballett Karlsruhe. In 2005 he received the German dance prize “Zukunft”, in 2006 he was promoted to the rank of principal dancer of the Staatsballett Karlsruhe and in 2013 he received the title Kammertänzer.

In the works of Reginaldo Oliveira – director of the Salzburger Landestheater – Flavio Salamanka has created roles in Medea – Der Fall M. and Anne Frank, among others. In 2010 and 2012 he presented his first choreography, Burn it Blue at the Noverre Society in Stuttgart, and also choreographed the Dance of the Hours for the opera production La Gioconda at the Badischen Staatstheater Karlsruhe. For the 2017/2018 season he joined the Salzburger Landestheater with choreographer Reginaldo Oliveira, where he continues to dance leading roles in Oliveira’s creations, as well as choreographing his own choreographies.